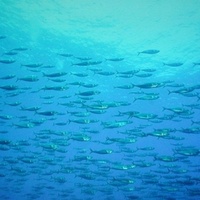 Biodiversity is the number of different types of plant and animal life which exist in a particular place. The way all the different types and varieties of organisms work together in the environment is considered an ecosystem. Loss of one or more of these plants and animals, as a consequence of climate change, can disrupt function of the marine ecosystem.

Each marine species has a particular habitat preference which reflects the most suitable environment for them to thrive and defines their distribution. Suitable habitats can be characterised by specific water temperature and salinity, depth range, substrate, as well as the presence of adequate food.

Changes in the climate are altering the marine environment, in particular scientists have recorded increases in water temperature due to changes in ocean currents such as the East Australian Current. Seawater is becoming more acidic due to more carbon dioxide (CO2) being absorbed by the oceans. Increases in ocean temperature and/or acidification can push species to the limit of their physical functions which has a harmful effect on their growth, reproduction, foraging, immunity, behaviour, and competiveness.

How are these changes impacting species in your local seas?

Read how fish and marine species in your region are reacting to marine climate change: